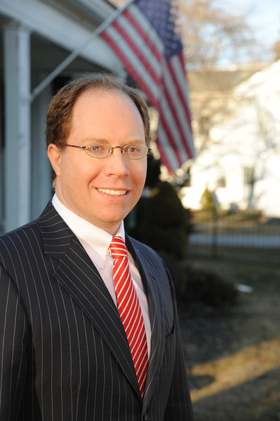 Schreibman, a native and resident of the district, is a former federal prosecutor in Manhattan, state prosecutor in Ulster County and Assistant General Counsel at the CIA. He looks forward to challenging first-term tea-party Republican Chris Gibson.

"Congress is broken. It's just not working for the people of upstate New York," Schreibman told some 200 committee members at the Convention.

"Republicans took control of Congress with Congressman Gibson's help less than two years ago and immediately embarked on an aggressive ideological agenda. They voted to end Medicare as we know it, to allow insurance companies to discriminate against you for pre-existing conditions. They exploded the budget deficit with more huge tax cuts for the very wealthy, and then they opened a war on women--even inserting an attack on women's health in the federal highway bill.

"This is not the agenda our people wanted. Since taking control of Congress, Republicans haven't accomplished a thing to create jobs or improve the economy. New Yorkers deserve better and that's what we're going to do.

"I was the first in my family to go to college-with scholarships, year-round jobs and loans that took years to repay. I know that opportunity isn't free and comes with obligations, but we must provide opportunity to the next generation and keep the faith that people showed in me. Our future prosperity rests upon effective education."

"We must keep that same faith with our seniors, and families struggling to get ahead. This is a campaign for fairness. The days of rewarding powerful interests and the already-privileged have to end.

"After more than a decade of public service in law enforcement and national security, I know a thing or two about tough fights. I'm ready to bring the energy, and the attitude, of a prosecutor to fix Washington."

Julian Schreibman was raised in Kingston, his family supported by his mother's small business. Julian is a graduate of Kingston High School, Yale College and Yale Law School. He lives in Stone Ridge, NY, with his wife, Shannon, and their three young boys. His mother, Anne Hebard, still lives in the Ulster County home where he grew up.

Paid for by Friends of Julian Schreibman