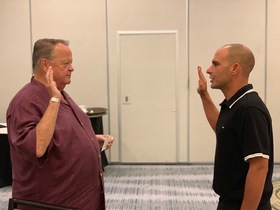 ALBANY, NY (07/24/2019) (readMedia)-- Effective today, Anthony M. Adamo of New Paltz is the new president of the CSEA Southern Region. Adamo, who has served as president of CSEA SUNY New Paltz Local 610 since 2009, was sworn into office this morning by CSEA President Danny Donohue.

Adamo is stepping up as region president following the retirement of Billy Riccaldo, who has served as Southern Region president since January 2008. Riccaldo, a West Haverstraw resident, retires this month after over 45 years of dedicated service as a County of Rockland employee.

"I am honored to step up as region president and look forward to advocating on behalf of our CSEA members throughout our Southern Region," said Adamo. "I am grateful for the strong leaders within our union, whose mentorship has helped prepare me for this new role. I thank President Riccaldo for his years of leadership within CSEA, his years of dedicated civil service to the people of Rockland County, and his passion for fighting on behalf of working people."

Adamo, an electrician, first became a CSEA member when he was hired at SUNY New Paltz in 1999. He has served in numerous roles within CSEA during his time as an activist, including serving for the past three years as chair of CSEA's Statewide Political Action Committee.

The CSEA Southern Region, which has over 38,000 members, covers the following counties: Orange, Rockland, Westchester, Ulster, Putnam, Dutchess and Sullivan.

The Civil Service Employees Association (CSEA) is one of the largest and most influential unions in New York and the United States. CSEA has about 300,000 members and represents state, county, municipal, school district, child care, and private sector employees. Formed in 1910, CSEA has improved the lives of hardworking New Yorkers for more than 100 years, and is the largest affiliate of the American Federation of State, County, and Municipal Employees (AFSCME). For more information, go to CSEANY.org.