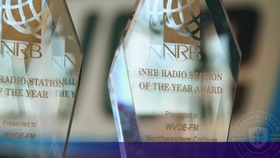 ST.PAUL, MN (02/28/2012)(readMedia)-- Northwestern College students made their presence known in the communication world when the results of the Intercollegiate National Religious Broadcasters were announced last week. Students in the Electronic Media Communication major at Northwestern were named winner of the National Religious Broadcasters (NRB) 2012 Student Production Competition (iNRB) including five first place production awards-half of the available first place awards in the competition!

"We thank God for his work through these students and feel humbled that He would grant us this wonderful joy," said Mark Seignious, Associate Professor of Communication. "We are happy for our students and hope they feel God's great pleasure in their accomplishments. While the industry has honored these students, it is the Lord's grace that abounds."

Northwestern radio students continued their domination of the audio categories and captured three of the four first place audio awards including Best Radio Drama, Best Commercial/PSA and Best News. In addition, this year the iNRB restructured the award nominations to include new film categories and students swept both the Long and Short Film categories taking first place in both.

"I hope our production can be used to further God's kingdom and bring glory to Him," said senior Lyssa Hester, part of the group that won first place for radio feature/drama.

Winners will be attending the NRB convention, which takes place on February 18–21 in Nashville. Students will listen to keynote speakers and have the opportunity to network with Christian communicators in their field.

"In addition to being thrilled for our students, we are also grateful that they have the opportunity to network at this national conference," said Ann Sorenson, Associate Professor of Communication. "In the past, students who attended the conference found unique internships on feature film sets the following summer, which opened up many other doors in their career path. It's amazing to see the Lord work in our students' lives."

Senior Ross Fleming, third place winner in the TV PSA/commercial category, added, "I have been wanting to go to the convention since I was a freshman, and as a senior this may be my last chance. It has been a dream of mine and is a great way to end my time here."

The full list of iNRB winners is included below: