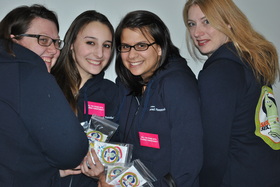 ALBANY, NY (02/11/2012)(readMedia)-- Cupid is on the prowl in the Capital Region, encouraging innocent bystanders to fall in love -- and sometimes into bed. So, Upper Hudson Planned Parenthood volunteers will be out in force to make sure those who fall from Cupid's arrows are at least armed with information and protection against STDs and unplanned pregnancies.

National Condom Week is a week long effort to emphasize the importance of condom use. The campaign often uses humor as a tool to help educate young adults about serious risks involved with unprotected sex. This includes the risk of catching and spreading sexually transmitted diseases as well as helping to prevent unwanted pregnancies.

National Condom Week will be celebrated in the Capital District from February 10th- 18th, 2012 with a series of four "pub crawls" by volunteers and staff from Upper Hudson Planned Parenthood. During this week, pub crawls are scheduled for twenty-three establishments in downtown Troy (2/10) , Hudson (2/11) and Albany 2/17-18). For specific dates and locations, go to www.uhpp.org.

All pub crawl stops will receive "Condom Week" coasters and Planned Parenthood volunteers will have giveaways and prizes. Pub patrons will be encouraged to play a trivia game called "Fact or Crap" trivia game. During the trivia games, crowd members will be asked to answer questions focused on common myths and facts related to sexual health. Those who provide correct answers will be rewarded with prize including Dunkin Donuts gift cards and safer sex kits which include condoms, lube, a dental dam and finger cot along with information about Upper Hudson Planned Parenthood's programs, services and hours. Outreach teams may also demonstrate proper condom usage on a model -- an educational toy model of course!

Each participating establishment will also receive a supply of special drink coasters which display the UHPP Captain Condom character and logo on one side, and the web sites for UHPP and the national GYT: "Get Yourself Tested" site sponsored by MTV and Kaiser Health on the other side. .

So remember when you see Cupid coming for you, make sure you catch a condom and nothing else!

Events Schedule (as of release date):

UHPP operates four health centers and serves over 10,000 patients each year in Albany, Columbia, Rensselaer and Greene Counties. All centers provide confidential STI testing and treatment, as well as HIV testing and counseling. UHPP educators provide over 500 programs each year to young people and professionals around the Capital Region.

Posted Saturday February 11, 2012 at 06:02 am by Upper Hudson Planned Parenthood