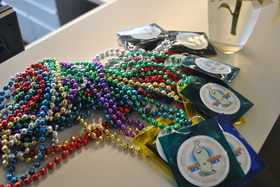 ALBANY, NY (02/11/2013)(readMedia)-- With National Condom Week set for February 14-21, Upper Hudson Planned Parenthood teams will be visiting local night spots urging sexually active individuals to talk to their partners about the importance of using condoms to protect against sexually transmitted diseases (STDs) and unintended pregnancy. Nearly 19 million STDs and more than 3 million unintended pregnancies occur each year, and condoms are the only form of contraception that also helps reduce the risk of STDs.

"Education and communication equip people to make responsible decisions about their health," said Chelly Hegan. "Data shows many people who have a sexually transmitted infection don't even realize it, so it's important to let your partner know that you want to use condoms every time you have sex to keep both of you healthy."

Contradicting long-established beliefs, a study published in February issue of the Journal of Sexual Medicine found that men and women rated recent sexual experiences as highly pleasurable whether or not condoms were used.

Upper Hudson Planned Parenthood staff and volunteers will be visiting over twenty night spots in the Albany, Troy, and Hudson region on Friday, February 15th and Saturday, February 16th.. At each location safer sex kits, as well as great prizes, will be given out. To find out more about where we'll be and when visit www.uhpp.org.

The Centers for Disease Control and Prevention's Sexually Transmitted Disease Surveillance 2010 estimates that nearly 19 million STDs occur each year, nearly half of which are among 15- to 24-year-olds. Women are at greater risk of infection than men, and STDs contribute to more severe health consequences for women. Planned Parenthood's line of stylish PROPER ATTIRE® condoms is designed to help women feel more comfortable buying and carrying condoms.