Alexander Heffner, author and host of "The Open Mind" on PBS, to visit the NYS Writers Institute

Heffner's visit marks the release of a revised and expanded 2018 edition of the million-selling book, "A Documentary History of the United States" 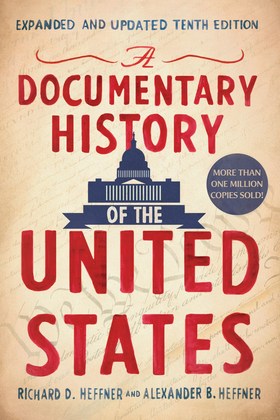 A Documentary History of the United States, 10th Edition

ALBANY, NY (10/30/2018) (readMedia)-- Alexander Heffner, author and host of "The Open Mind" on PBS, will mark the release of a revised and expanded 2018 edition of the million-selling book, A Documentary History of the United States, with a day of programs on Tuesday, November 13.

At 4:15 p.m., Heffner will give a Craft Talk in the Multi-Purpose Room, Campus Center West Addition on the University at Albany uptown campus, 1400 Washington Avenue. Later that same day at 7 p.m., members of the local community -- a diverse range from political leaders to elementary school children -- will read memorable lines from America's founding documents, followed by a conversation and Q&A with Heffner in the Huxley Theatre, NYS Museum, Cultural Education Center, 222 Madison Avenue, Albany.

A Documentary History of the United States, first published in 1952, includes documents, speeches, and letters that have forged American history, accompanied by interpretations of their significance by noted historian and broadcaster, the late Richard D. Heffner.

In the foreword to this 10th edition, his grandson Alexander Heffner writes, "It is a perilous moment for democracy. In an age of pervasive misinformation, there could be no more essential task than safeguarding our history and humanity as fellow Americans."

Some of documents included:

* The complete text of the Declaration of Independence

* The complete Constitution of the United States

* Martin Luther King, Jr.'s "I Have a Dream" Speech

* Documents relating to September 11 attacks and the Iraq War

This edition has also been expanded and updated to include a chapter on the presidency of Donald Trump and the digital age, including Presidential tweets, Congressional testimony on cyberespionage, speeches by U.S. Senators Bernie Sanders and Jeff Flake, and Facebook posts by Mark Zuckerberg.

Bill Moyers said, "Here is fertile soil for exploring our past and imagining our future. Present crises notwithstanding, you cannot spend time within these pages and be skeptical of our capacity to overcome, survive, and thrive...."

Pulitzer Prize-winning historian Annette Gordon-Reed also praised the compendium: "This insightful collection will fascinate, delight, and challenge all who are interested in the progress of the American nation over the years. The broad sweep of U.S. history comes alive in this display and analysis of documents that have helped to create American society as we know it."

Richard D. Heffner (1925-2013) taught history and political science at the University of California, Sarah Lawrence College, the New School for Social Research, and NYU. He also produced and moderated the award-winning television series, "Richard Heffner's Open Mind" for 50 years, the longest-running public broadcast in the history of American television.

Alexander B. Heffner, the current host of "The Open Mind," is a journalist whose writing has appeared in The Wall Street Journal,The Washington Post, The Boston Globe, The Philadelphia Inquirer, USA Today, and Newsday among other leading publications. He has been interviewed about politics, education and stories in the news by PBS, C-SPAN, CNN and the BBC, among other national and local broadcast venues.

Cosponsored by the NYS Writers Institute, the State Education Department's Office of Cultural Education and Friends of the New York State Library.