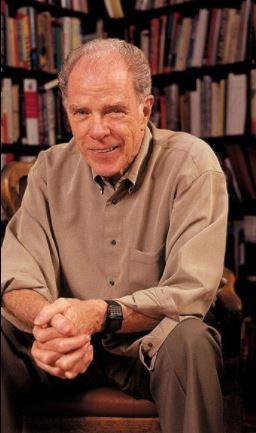 ALBANY, NY (11/19/2018) (readMedia)-- Novelist William Kennedy, author of the acclaimed Albany Cycle of novels and founder of the New York State Writers Institute at the University at Albany, will receive the 2018 Presidential Distinguished Service Award of Ireland.

The President of Ireland, Michael D. Higgins, will present Kennedy with his award at a dinner and ceremony in Dublin on Thursday, November 29. Kennedy and the other honorees, who live outside Ireland, are recognized for the service they have given to Ireland and Irish communities abroad.

Kennedy was cited for the powerful ways in which his novels illuminate the Irish-American experience. Kennedy will be honored along with Irish writer Edna O'Brien, who lives in London, and whose celebrated novels, stories, plays and poems offer frank portrayals of women and the female experience. Philip Roth described her as "the most gifted woman now writing in English." O'Brien visited the Writers Institute in 1997 and 1999.

"This is a marvelous award, and a form of confirmation – that I really did what I set out to do when I was a young writer," Kennedy said. "I aspired then to be an American novelist, but as soon as I started writing I realized how much of the Irish was in, not only me, but in all my schools, my churches, my neighborhood -- which even in my father's day was called Limerick -- and it also was in the politicians who ran the city and county, and when they got lucky, the state and the nation. And so my novels, in large measure, became a historical testament to what I lived through, and reported on, as the vast Irish consequence in American life during two centuries."

The honorees are selected through a nomination process and a panel of experts assembled by the staff of the Irish Embassy and the Department of Foreign Affairs and Trade. Recipients are chosen in several categories including arts and culture, charitable works, science and technology and Irish community support. The award is based on contributions to Ireland's international reputation and Irish communities abroad.

"The hard work, energy and dedication of the awardees make a valuable contribution to people's lives and are deserving of our respect," the award's citation reads. "We honor exceptional members of the Irish diaspora."

"We are thrilled that William Kennedy, our founder, is being given this prestigious honor by the President of Ireland," Writers Institute director Paul Grondahl said. "His Albany Cycle of novels has touched readers around the world with universal themes of love, loss and redemption, built around characters who struggle as Irish immigrants to gain their piece of the American Dream."

This latest honor comes at a watershed moment for Kennedy, who has kept busy during his 90th year, which the Writers Institute has celebrated throughout 2018 in conjunction with the 35th anniversary of the organization Kennedy founded.

With the collaboration of the Writers Institute, SUNY Press published Bootlegger of the Soul: The Literary Legacy of William Kennedy in September and Kennedy signed copies of the book at the inaugural Albany Book Festival at UAlbany on Sept. 29.

In addition, WMHT-TV premiered in September a new documentary, Inside the Writers Institute, which chronicles Kennedy's vision for creating the nation's premiere literary presenting organization based at the University at Albany. The New York State Writers Institute, founded by Kennedy in 1983, is responsible for making Albany a famous crossroads on the map of world literature for visiting writers in all genres. More than 2000 writers and filmmakers, including a dozen Nobel laureates, have visited the University in the past 35 years.

Kennedy also is working on a stage adaptation of Ironweed, which won the 1984 Pulitzer Prize for Fiction and was made into a feature film starring Jack Nicholson and Meryl Streep. Kennedy has been collaborating with director-screenwriter Jodie Markell and held recent staged readings in New York City with actors Mark Ruffalo and Jessica Hecht in the lead roles, and they hope to bring a full production to the stage in the near future.

For more information, contact Michael Huber at the Writers Institute at mhuber@albany.edu or 518-437-3969.