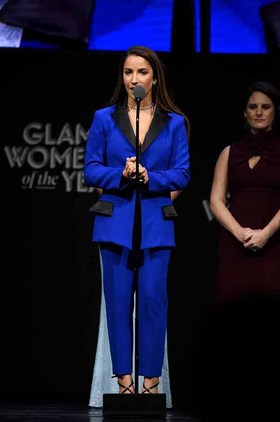 Aly Raisman at the 2018 Glamour Magazine Women of the Year Awards in NYC on November 13, 2018 (Getty Images)

The event is free and open to the public. Registration is required and due to anticipated demand, only two tickets will be available per registrant. Printed confirmations are required for admittance and seating is first-come, first-serve. To register, visit http://ualbany.universitytickets.com/user_pages/event_listings.asp

Raisman will be interviewed onstage by Kathryn Zox, nationally recognized radio host and UAlbany alumna. Doors will open at 6:30 p.m.

Raisman is one of the most decorated American gymnasts of all time, winning six Olympic medals as a captain of the U.S. women's gymnastics teams, the "Fierce Five" in 2012 and "Final Five" in 2016. She now uses her platform to promote body positivity, advocate for sexual abuse survivors and push for systematic changes within the sport of gymnastics.

In November 2017, Raisman came forward as one of the many victims sexually abused by the former Olympic team physician, Larry Nassar, starting from the age of 15. On January 19, 2018, Raisman was one of several victims that read impact statements at Nassar's sentencing, and one month later, Raisman filed a lawsuit against USA Gymnastics and the USOC claiming both organizations "knew or should have known" about the ongoing abuse.

In May, 2018, Raisman and the other survivors of the USA Gymnastics sexual abuse scandal were awarded the Arthur Ashe Courage Award, and in November, 2018, earlier this month, Raisman was named an honoree at the Glamour Magazine 2018 Women of the Year Awards held in New York City.

Raisman's 2017 New York Times best-selling memoir Fierce: How Competing for Myself Changed Everything delves into both her victories and struggles over the course of her gymnastics career, including surviving sexual abuse.

Raisman, a native of Needham, Mass., started gymnastics at just 18 months old. A member of the U.S. Olympic women's gymnastics team, she started learning her sport not long after she began walking. In an interview with USA Gymnastics, Raisman said, "I was 2 years old when my mom put me in mommy and me classes. I always had a lot of energy so it was the perfect fit!"

The oldest of four children, Raisman is the daughter of two athletic parents. Her mother was a gymnast in high school and her father played hockey.

The series is sponsored by the UAlbany Student Association, Division of Student Affairs, University Auxiliary Services and the Alumni Association, in partnership with the New York State Writers Institute.