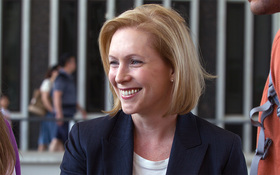 In an earlier version of this media release, the first name of U.S. Senator Kirsten Gillibrand was misspelled. It is corrected below.

The reading and discussion, moderated by non-fiction writer Marion Roach Smith, will be held 7:30 p.m. Friday, December 7, at Page Hall, 135 Western Avenue, on the University at Albany Downtown Campus.

Gillibrand's book features profiles of inspiring figures in the fight for women's suffrage, including Elizabeth Cady Stanton, Susan B. Anthony, Sojourner Truth, Harriet Tubman, and includes stories on lesser-known activists such as Inez Milholland, who led the Women's Suffrage Parade of 1913 on horseback, the first suffragist parade in Washington, D.C.

Milholland is among six of the 10 women highlighted by Gillibrand with New York connections.

Bold & Brave features illustrations by award-winning artist and writer Maira Kalman, whose illustrations have been featured on several New Yorker covers and whose most popular children's book is Fireboat: The Heroic Adventures of the John J. Harvey.

Born and raised in Albany and educated at the Emma Willard School in Troy, Gillibrand credits her grandmother, Albany political organizer Polly Noonan, and her mother, attorney Penny Rutnik, with sparking her interest in politics. Gillibrand easily won re-election to her second full term earlier this month.

The junior senator from New York since January 2009 has been in the news recently as rumors swirl about a potential presidential run in 2020, telling the late-night show host Stephen Colbert that she would "give it a long, hard thought of consideration."

In 2014, Gillibrand visited the Writers Institute upon the release of her memoir, Off the Sidelines, which focuses on her upbringing, the early days of her professional life and her political career.