Co-directed by Mary Paley, whose previous documentary THE NEIGHBORHOOD THAT DISAPPEARED featured her father's photography 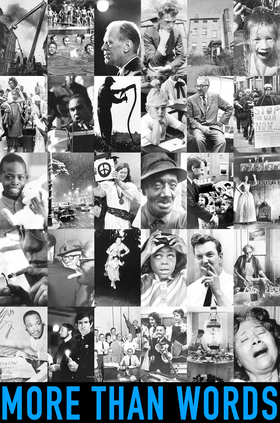 Film screening with panel discussion featuring director Mary Paley 7 p.m. Friday, November 16, at Page Hall, 135 Western Avenue, on the University at Albany Downtown Campus. The event, free and open to the public, is cosponsored by the NYS Writers Institute, WMHT and the Albany Times Union. View the trailer at https://www.nyswritersinstitute.org. For more information, call 518-442-5620.

The late Bob Paley, a photographer for the Albany Knickerbocker News from 1946 to 1974, was frequently described as a poet with a camera.

In this new documentary, MORE THAN WORDS: THE PHOTOGRAPHY OF NEWSMAN BOB PALEY, Paley's daughter Mary presents the startling and beautiful images of his singular career. A film screening followed by a panel discussion will be held 7 p.m. Friday, November 16, at Page Hall, 135 Western Avenue, on the University at Albany Downtown Campus. The event is free and open to the public.

The documentary draws heavily from the photo library of Paley, whose images energized people and sparked social change. The stories of those who lived during that turbulent period are documented through the personal testimony and photographs of those who tried to tell the story of those times.

"I spent 15 years sifting through subjects and topics in my father's photo library," Mary Paley said, "I collected oral histories from the primary sources in dad's photos and the journalists who worked with him at the Knickerbocker News. This project became my passion. "

Often with a single photo, Paley captured the mood, moment, and meaning of the forces that rocked mid-20th century America. Rosemary Armao, a former journalism professor at the University at Albany, recalled working alongside Paley at the Knickerbocker News during the early 1970s, "I can remember trying in every story I wrote, to capture in words what Paley had done with photos."

MORE THAN WORDS (United States, 2018, 85 minutes, b/w and color, co-directed by Mary Paley and Jon Russell Cring) tells the story of how a small city in upstate New York coped with the powerful forces that were unleashed as America came of age in the years following World War II. The film is truly a newspaper story; a tribute to the tireless crusaders of America's fact-based media.

Mary Paley's acclaimed 2014 Albany documentary, THE NEIGHBORHOOD THAT DISAPPEARED, co-directed with John Romeo and co-written with Patrick J. Bulgaro, told the story of how one of the most massive urban renewal projects in American history sterilized the cultural and ethnic heart of Albany to build the Empire State Plaza. Paley was inspired to undertake the project by studying the extensive photographic archive of her father, who had documented the people, businesses, and ethnic groups displaced by the project, completed in 1978 after 13 years of construction. The film's

2014 premiere on public TV station WMHT in Albany broke the station's highest pledge of support in a single broadcast since the station went on the air in 1962.

The event, free and open to the public, is cosponsored by the NYS Writers Institute, WMHT and the Albany Times Union.

View the MORE THAN WORDS trailer at https://www.nyswritersinstitute.org.