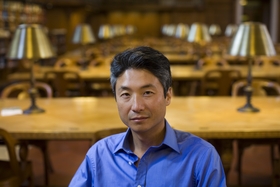 ALBANY, NY (03/17/2010)(readMedia)-- Chang-rae Lee, prize-winning Korean-American novelist and one of the leading fiction writers of his generation, will speak about his epic novel of the Korean War, "The Surrendered" (2010), at 8:00 p.m., Thursday, April 8, 2010, in the Recital Hall, Performing Arts Center, on the University at Albany's uptown campus. Earlier that same day at 4:15 p.m. the author will present an informal seminar in Campus Center 375 on the uptown campus. Sponsored by the New York State Writers Institute, the events are free and open to the public.

Lee, whose work explores the modern Asian and Asian-American experience, received the Hemingway Foundation/PEN Award for his first novel, "Native Speaker" (1995), and was named one of the "20 Best American Novelists Under 40" by the "New Yorker" in 1999.

His new novel is "The Surrendered" (2010), the epic story of a Korean orphan, an American GI, and a troubled missionary wife who meet during the immediate aftermath of the Korean War. The novel is loosely inspired by stories of death and survival among members of the author's own family, told reluctantly to Lee by his father who fled the shelling of Pyongyang at the age of twelve.

In a starred review, "Publishers Weekly" said, "Powerful, deeply felt, compulsively readable and imbued with moral gravity, the novel does not peter out into easy redemption. It's a harrowing tale: bleak, haunting, often heartbreaking-and not to be missed." "O." the Oprah Magazine, called it, "A landmark novel about love and war. . . impossible to put down."

Writing in "Elle," novelist Kate Christensen described the book as, "Beautiful, riveting, piercingly haunting . . . The settings and times are masterfully interwoven to form an elegant, disturbing inquiry into courage, love, loyalty, and mercy. . . . This is a book to read in two or three long sittings, gulping pages, turning them as fast as possible to reach the perfect, inevitable ending."

Lee's first novel, "Native Speaker" (1995), is a story of conflicted personal identity featuring Henry Park, a troubled Korean-American employed as a spy for a private intelligence-gathering agency. Writing in advance praise, novelist Frederick Busch called it, "A novel of extraordinary beauty and pain…nothing less than brilliant." The "Vogue" reviewer said, "With echoes of Ralph Ellison, Chang-rae Lee's extraordinary debut speaks for another kind of invisible man: the Asian immigrant in America…a revelatory work of fiction."

Lee's other books include "A Gesture Life" (1999), a national bestseller and New York Times Notable Book of the Year that explores the traumas and personal experiences of Korean "comfort women" during World War II; and "Aloft" (2004), the story of an aging Italian-American and the conflicts within his multi-ethnic Long Island family.