NYS Writers Institute welcomes Roberts, who will give a talk on writing before joining two-time Green Party presidential candidate Jill Stein, Danielle Belton, editor of The Root, and Albany Mayor Kathy Sheehan for the panel discussion 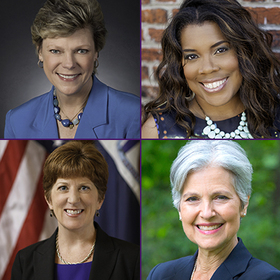 Both events are free and open to the public, and the evening event is cosponsored by the Times Union Women@Work network of business and professional women.

Roberts will host a craft talk on writing about women's history 4:15 p.m. in the Performing Arts Center's Recital Hall on the University at Albany uptown campus. Later that same day, Roberts will be joined by Jill Stein, Danielle Belton, and Albany Mayor Kathy Sheehan for "Women and Power in America," a panel discussion on the challenges and opportunities facing women, to be held at 7:30 p.m. in the Hearst Media Center, 645 Albany Shaker Road in Colonie.

One of America's leading broadcast journalists, Roberts has often been described as a "founding mother" of NPR. She joined ABC News in 1992, serves as a regular roundtable analyst for This Week with George Stephanopoulos, and writes a syndicated column with her husband, Steven Roberts. Her honors include the Edward R. Murrow and Walter Cronkite awards and in 2008, the Library of Congress named her a "Living Legend."

Roberts has written several books of women's history, including New York Times bestsellers Capital Dames (2015), We Are Our Mothers' Daughters, (2010), and Founding Mothers (2004), which won praise from The Washington Post: "Roberts has uncovered hundreds of personal anecdotes and woven them together in a single, suspenseful narrative with great skill." In addition, Roberts has written two books with her husband, From This Day Forward, (2000), an account of their 51-year marriage and other long-lasting marriages in American history, and Our Haggadah: Uniting Traditions for Interfaith Families (2011).

Danielle Belton is editor-in-chief of The Root, the Internet's most-visited African-American news and culture site, founded by Henry Louis Gates, Jr. and Donald E. Graham. Prior to joining The Root, Belton created and wrote the acclaimed blog, The Black Snob, followed by millions of readers. She served formerly as editor-in-chief of Clutch magazine, and head writer for BET's Don't Sleep, hosted by T. J. Holmes.

Jill Stein was the Green Party's nominee for President of the United States in the 2012 and 2016 elections. She also ran as the Green Party candidate for Governor of Massachusetts in 2010 and 2002. A physician and graduate of Harvard Medical School, she is a noted crusader for progressive causes including voter rights, children's health, and climate change prevention.

Kathy Sheehan, the first female mayor of Albany, (2014-present) is an attorney and former Albany City treasurer. She was re-elected to a second term in November 2017, winning 70% of the vote. Sheehan is also a founding member of the Albany Promise, a coalition of community members, educators, service providers, and business leaders working to ensure that every child in Albany succeeds academically.

The evening program is cosponsored by the Times Union Women@Work network of business and professional women (http://tuwomenatwork.com).

For additional information, contact the Writers Institute at 518-442-5620 or online at www.nyswritersinstitute.org.