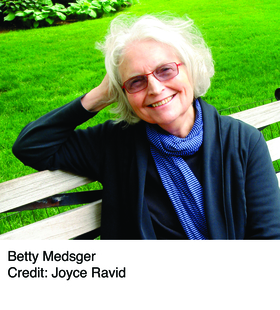 Betty Medsger, author of the nonfiction book, "The Burglary" (2014)

ALBANY, NY (11/14/2014)(readMedia)-- The documentary film 1971: THE FILM, about an FBI office break-in that revealed a secret government program of spying on American citizens, will be screened on Friday, December 5, at 7:00 p.m. in Page Hall, 135 Western Avenue, on the University at Albany's Downtown Campus. The screening will be followed by commentary by the film's editor, Gabriel Rhodes, and journalist Betty Medsger, author of the nonfiction book The Burglary (2014), on which the film is based. Earlier that day at 4:15 p.m. Rhodes and Medsger will present an informal seminar in the Science Library, Room 340, on UAlbany's Uptown Campus. Both events are sponsored by the New York State Writers Institute in conjunction with UAlbany's School of Criminal Justice's Civility, Surveillance, and Public Spaces Film Series, and are free and open to the public.

1971: THE FILM (United States, 2014, 79 minutes, color, directed by Johanna Hamilton), is based on the nonfiction book, The Burglary: The Discovery of J. Edgar Hoover's Secret FBI (2014) by Betty Medsger. The film was nominated for Best Documentary Feature at the 2014 Tribeca Film Festival.

On March 8, 1971 eight ordinary citizens broke into an FBI office in Media, Pennsylvania, a town just outside Philadelphia, took hundreds of secret files, and shared them with the public. In doing so, they uncovered the FBI's vast and illegal regime of spying on and intimidating Americans exercising their First Amendment rights. Despite one of the largest investigations ever conducted, the FBI was unable to catch the burglars. Those responsible never revealed their identities-until now.

Betty Medsger was a young reporter at the Washington Post in 1971 when she received from anonymous sources copies of stolen FBI files that revealed the existence of COINTELPRO, a secret and illegal program of spying on American citizens with the aim of suppressing political dissent and free speech. It represented the first time in American history that a journalist received and published secret government files (predating the Pentagon Papers by three months). Decades later, Medsger, a journalism professor at San Francisco State University, took it upon herself to track down the burglars and persuaded them to reveal their motives and identities to the world. Their story is told in her new book, The Burglary: The Discovery of J. Edgar Hoover's Secret FBI (2014). The New York Times Book Review called it, "Impeccably researched, elegantly presented, engaging..." and said, "For those seeking a particularly egregious example of what can happen when secrecy gets out of hand, The Burglary is a natural place to begin."

Gabriel Rhodes is both an editor and a filmmaker. His work has premiered at Sundance and Cannes and has been broadcast on Sundance Channel, A&E, Animal Planet, CNN, PBS, and on the NPR radio show "This American Life." His theatrical documentary credits include 1971: THE FILM (2014), WITHOUT SHEPHERDS (2012), THE TILLMAN STORY (2009), and CONTROL ROOM (2004). Three of his edited films, THE TILLMAN STORY, QUEST FOR HONOR (2008), and MY BLIND BROTHER (2003) were shortlisted for the Academy Awards. His commercial clients include Conde Nast, Google, Virgin America, YouTube, Harper Collins and Revlon. He received his Master's Degree in Documentary Film from Stanford University in 2000.