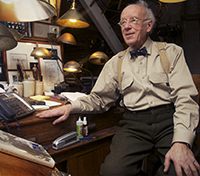 Eugene Lee, legendary set designer, will deliver the NYS Writers Institute's 22nd Annual Burian Lecture at 7:30 p.m. on Monday, April 30 in the Studio Theatre, Performing Arts Center on UAlbany's uptown campus. Earlier that same day, at 4:15 p.m. in the Studio Theatre, Lee will hold an informal craft talk. Free and open to the public, the programs are cosponsored by the Jarka and Grayce Burian Endowment and UAlbany's Theatre Program.

Free and open to the public, the events are funded by the Jarka and Grayce Burian Endowment and cosponsored by the New York State Writers Institute and the UAlbany Theatre Program.

Lee won his first Tony for Best Scenic Design of a play for Leonard Bernstein's Candide in 1974, the same year he joined the NBC team that launched the live comedy show now known as Saturday Night Live. He has since won two more Tonys – for Stephen Sondheim's Sweeney Todd in 1979 and UAlbany alumnus Gregory Maguire's Wicked in 2004. He has also been awarded nine Drama Desk awards and two Emmys.

Along with his 44-year tenure at Saturday Night Live, Lee has also served as set designer for late-night shows featuring SNL alums, including The Tonight Show with Jimmy Fallon and Late Night with Seth Meyers.

Lee described his Saturday Night Live work week in an interview with Deadline.com, "On a typical show, we probably have six or seven sets, easily. These days, it's changing so fast-we can do whole things, and then it's cut in a second. It has nothing to do with how good we make it look, or how complex it is; if Lorne [Michaels] isn't happy with it, it just gets cut."

The late Jarka Burian taught in the Theatre Department at UAlbany from 1955 to 1993. He was the leading American scholar of Czech theatre and the author of the award-winning book The Scenography of Josef Svoboda, a seminal critical study of the work of one of the twentieth century's most influential theatrical designers. Grayce Susan Burian, who received her M.A. degree from UAlbany and also taught there, is best known for her long tenure as the director of the theatre program, which she founded, at Schenectady County Community College.