Author writes for "teenage boys who don't like to read" 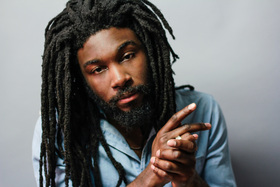 ALBANY, NY (10/30/2015)(readMedia)-- Jason Reynolds, prize-winning author of young adult fiction set in urban, African-American communities, and written for "teenage boys who don't like to read," will read from his new novel about policing, profiling, and black-white relations, All American Boys (2015, with Brendan Kiely) on Tuesday, November 17, 2015 at 7:00 p.m. in the Huxley Auditorium of the New York State Museum, Empire State Plaza in downtown Albany. Free and open to the public, the event is sponsored by the New York State Writers Institute, and cosponsored by Albany High School, The Center for Law and Justice, The African American Cultural Center of the Capital Region, the Department of Literacy Teaching and Learning at UAlbany's School of Education, and the Friends of the New York State Library.

Jason Reynolds, award-winning YA novelist, writes books for "teenage boys who don't like to read." In highly engaging and laugh-out-loud prose, his fiction depicts the trials and tribulations of young adulthood in African-American neighborhoods in the inner city.

For his first novel, When I Was the Greatest (2014), Reynolds received the American Library Association's Coretta Scott King/John Steptoe Award for New Talent. Booklist called it, "urban fiction with heart, a meditation on the meaning of family, the power of friendship, and the value of loyalty." The book also appeared on the "2015 Best Fiction for Young Adults" list of the American Library Association's Young Adult Library Services Association.

His newest novel is All American Boys (2015, with Brendan Kiely), the story of two teens-one black, one white-and the repercussions of a single violent act. Sixteen year old Rashad is looking for nothing more than a bag of chips when a fist-happy cop mistakes him for a shoplifter. National Book Award winner Jacqueline Woodson said, "At once timely and timeless, funny and wickedly smart, All American Boys is a beautifully written narrative... about what it means to be a young man in America...." The novel was originally scheduled to be released in 2016, but was fast-tracked by publisher Simon & Schuster because of its relevance to current policing controversies.

Reynolds is also the author of The Boy in the Black Suit (2015), about a young man who loses his mother to cancer. The NPR reviewer called it, "a beautifully real approach to grief." School Library Journal said, "The author's seemingly effortless writing shines in this slice-of-life story, which covers a lot of the protagonist's emotional ground. The realistic setting and character-driven tale keeps readers turning the pages of this winner."

Reynolds will spend the day meeting with students at Albany High School before presenting to the general public in the evening event at the New York State Museum.

For additional information, contact the Writers Institute at 518-442-5620 or online at http://www.albany.edu/writers-inst.