Two-time Academy Award winner turns to writing: "I have a much better time writing books" 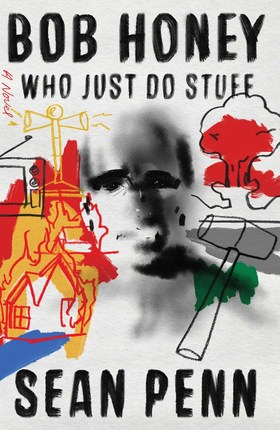 Two-time Oscar winner Sean Penn will discuss his debut novel Bob Honey Who Just Do Stuff at 7:30 p.m. Friday, Sept. 21, at Page Hall, 135 Western Ave. on the University at Albany Downtown Campus. The event is free and open to the public.

Sean Penn, two-time Academy Award winner, the first for MYSTIC RIVER (2003) and the second for his portrayal of UAlbany alum Harvey Milk in MILK (2008), comes to Albany to discuss his debut novel, Bob Honey Who Just Do Stuff, the tale of an "odd job man" who kills off the weak and the sick as part of a secret contract with the government.

The conversation and Q& A will be held 7:30 p.m. Friday, Sept. 21, at Page Hall, 135 Western Ave. on the University at Albany Downtown Campus. The event is free and open to the public.

In an interview with Vogue published in April 2018, Penn discussed his interest in writing, "But I don't have, in my view, a generic interest in making films. I have a much better time writing books, and that'll probably dominate my creative energies for the foreseeable future."

Salman Rushdie called Bob Honey "great fun to read...It seems wrong to say that so dystopian a novel is great fun to read, but it's true. I suspect that Thomas Pynchon and Hunter S. Thompson would love this book."

Paul Theroux praised Bob Honey as "comic, cauchemaresque, crackling with life, Bob Honey is a hero of our Trumpian times reflected in the cracked mirror of Penn's prose. I loved that it defied the critics who are, as always like eunuchs in a harem-observing the creative act but unable to do the same," and a starred review in Booklist wrote, "Penn takes on an ambitious challenge here, and he succeeds spectacularly."

Penn has appeared in more than 50 films and is also a prize-winning director. His adaptation of Jon Krakauer's INTO THE WILD appeared on numerous top ten lists in 2007.

In 2006, Penn received the Christopher Reeve First Amendment Award from the Creative Coalition for his commitment to free speech. In September 2005, Penn traveled to New Orleans to aid Hurricane Katrina victims, and newspapers published photos of him physically involved in rescuing people. After the 2010 Haiti earthquake, Penn founded the J/P Haitian Relief Organization -- https://www.jphro.org -- a non-profit organization which ran a 55,000 person tent camp to provide temporary housing for those left homeless from the disaster.

Sponsored by the University at Albany Division of Student Affairs, Alumni Association, University Auxiliary Services, UAlbany Foundation, and the Justice and Multiculturalism Project in the School of Criminal Justice in partnership with the New York State Writers Institute.

For the latest information, go to https://www.nyswritersinstitute.org

For additional information contact the Writers Institute at 518-442-5620 or at writers@albany.edu.