Following the reading, the audience is encouraged to share ideas with the director, playwright and actors 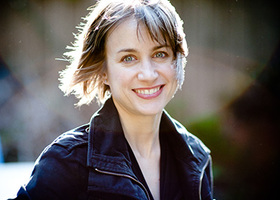 The NYS Writers Institute's Authors Theatre presents a staged reading of Southern Haunt followed by a Q&A session with the creative team at 7:30 p.m. Monday, April 2 at the Studio Theatre, Performing Arts Center, on the University at Albany uptown campus. Free and open to the public, the event is cosponsored by the NYS Writers Institute, the Jarka and Grayce Burian Endowment and UAlbany's Theatre Program.

"The piece only has three characters, which was a writer's challenge that I gave myself: to see if I could keep the drama going with mostly two-person scenes," said Walat, an assistant professor in the Theatre Program at the University at Albany. "There's some comedy too, and seeing whether that works is another reason why I'm looking forward to hearing the work in front of an audience."

What about the "spooky" element of the play? Walat responds, "How can you make something creepy - and even scary - in the theater, without the use of cinematic special effects? That's a question that my director, Portia Krieger and I have been talking about."

Walat's award-winning plays include Creation, for which she was nominated for an LA Stage Alliance Ovation Award for Playwriting; Victoria Martin: Math Team Queen, an Off-Broadway production published in New Playwrights: The Best Plays of 2007; Bleeding Kansas; See Bat Fly; and Ancient Gods of the Backwoods. She also wrote the libretto for the chamber opera, Paul's Case, which The New Yorker named one of "Ten Notable Performances" for 2014.

"I've worked on several projects with Portia, including a production in New York with New George's theater company," said Walat. "She's an amazing collaborator, insightful in her dramaturgical feedback, and open and generous with everyone in the rehearsal room."

The three actors – "a fabulous bunch," said Walat -- have each performed on Broadway, Off-Broadway, and regionally throughout the country. Christian Conn appears later this month in the Off-Broadway production of David Ives' The Metromaniacs, Portia Johnson played Mama Nadi in the Pulitzer Prize-winning Ruined in New York and LA, and Ismenia Mendes has recently had leading roles in recent productions of the Public Theater/Shakespeare in Central Park.

Authors Theatre was created to bring dramaturgy and audience response into the creative process. Featuring staged readings of original plays-in-progress or adaptations of work from other genres, Authors Theatre is designed to focus on dramatic writing as literary text and to provide a mechanism to assist playwrights in the creation of new work.

"Getting to explore my play with these artists, and to be in dialogue with the greater UAlbany literary/theater community about it, will be such a benefit to my process, as I continue to work on the piece," Walat said.

Free and open to the public, the event is cosponsored by the NYS Writers Institute, the Jarka and Grayce Burian Endowment and UAlbany's Theatre Program.

For additional information, contact the Writers Institute at 518-442-5620 or online at www.nyswritersinstitute.org