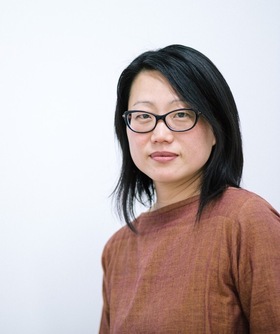 EVENT LISTING: Jean Shin, nationally recognized installation artist will visit the University at Albany for a conversation with WAMC's Joe Donahue as part of The Creative Life series.

Free and open to the public, the event will take place on Thursday, November 1, at 7 p.m. at The Performing Arts Center on UAlbany's Uptown campus. A Pre-Event Public Reception is to be held at 5:30 p.m. at The University Art Museum before the conversation.

Jean Shin (b. 1971) is nationally recognized for her monumental installations that transform everyday objects into elegant expressions of identity and community. Shin will visit the University at Albany for an evening of conversation with WAMC's Joe Donahue as part of the University's The Creative Life: A Conversation series on Thursday, November 1, 2018 at 7 p.m. at The Performing Arts Center on UAlbany's Uptown Campus.

Shin was selected as the juror of the 2018 Artists of the Mohawk Hudson Regional Exhibition on view at the University Art Museum through December 8, 2018 with an Artists' Reception on Friday, October 19, 5 – 8 p.m.

Born in Seoul, South Korea and raised in the United States, Shin attended the Skowhegan School of Painting and Sculpture in 1999 and received a BFA and MS from Pratt Institute in Brooklyn. She is tenured Adjunct Professor of Fine Art at Pratt Institute. She lives and works in Brooklyn, NY, as well as part-time in the Hudson Valley.

For each of her projects, Shin amasses vast collections of a particular object-prescription pill bottles, sports trophies, sweaters-which are often sourced through donations from individuals in a participating community. These intimate objects then become the materials for her conceptually rich sculptures, videos and site-specific installations.

Distinguished by her meticulous, labor-intensive process, and her engagement of community, Shin's arresting installations reflect individuals' personal lives as well as collective issues that we face as a society. Her work has been widely exhibited in over 150 major museums and cultural institutions including solo exhibitions at the Museum of Modern Art in New York City, Fabric Workshop and Museum in Philadelphia, Smithsonian American Art Museum in Washington D.C., Scottsdale Museum of Contemporary Art in Arizona and the Crow Collection in Dallas.

As an accomplished artist practicing in the public realm, she also realizes large-scale, permanent installations commissioned by major public agencies on the federal level as well as city and arts for transit programs. Shin recently completed a landmark commission for the MTA's Second Ave Subway at the 63rd Street Station in New York City.

Founded in 1936, the Artists of the Mohawk Hudson Region exhibition is among the longest-running regionals in the country and provides a leading benchmark for contemporary art activity in the Upper Hudson Valley and Adirondack regions. The exhibition focuses on contemporary artists living and working within a 100-mile radius of the Capital Region and rotates annually among the University Art Museum, the Albany Institute of History & Art, and the Hyde Collection in Glens Falls.

This year's UAlbany's Creative Life series will also include writer Esmeralda Santiago on Thursday, November 8, 2018. Santiago is widely celebrated as a founding mother of Nuyorican literature.

Major support for The Creative Life is provided by The University at Albany Foundation with additional support from the UAlbany Alumni Association, College of Arts and Sciences, Office of the Provost and University Auxiliary Services. For additional information, call the UAlbany Performing Art Center box office at 518-442-3997.