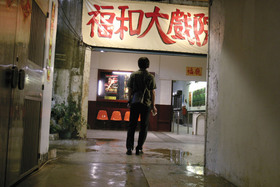 ALBANY, NY (10/19/2012)(readMedia)-- "Goodbye, Dragon Inn" ["Bu San"] (Taiwan, 2002, 82 minutes, color, in Mandarin with English subtitles, directed by Tsai Ming-liang) will be shown on Friday, November 2, 2012 at 7:30 p.m. in Page Hall, 135 Western Avenue, on the University at Albany's downtown campus. Sponsored by the New York State Writers Institute as part of its Classic Film Series, the screening is free and open to the public.

"Goodbye Dragon Inn" is the third film in a mini-series within the Classic Film Series entitled, The Future of Film. The selections for The Future of Film series are based on film critic J. Hoberman's list of global cinema's most important quintessential 21st century motion pictures. Hoberman, (who will appear at the Writers Institute on December 7), offers his selections in his book Film After Film (2012), an exploration of the future of the film industry with the advent of new digital image-making technologies, globalization, and accelerated cultural change.

Set in a run-down Taipei movie palace on its final day of business, "Goodbye, Dragon Inn" is both a tribute to the art of film and an elegy for the end of cinema as we know it. At the time of its U.S. release, J. Hoberman called it, "a movie of elegant understatement and considerable formal intelligence."