Broadway musical legend will be interviewed by WAMC's Joe Donahue as part of the university's Creative Life: A Conversation Series 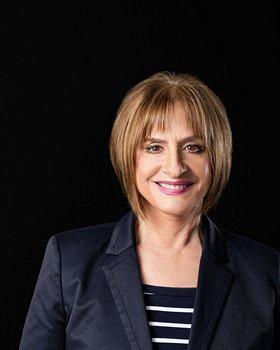 ALBANY, NY (04/09/2018) (readMedia)-- Actress and Broadway musical legend Patti LuPone will visit the University at Albany for an evening of conversation with WAMC's Joe Donahue as part of The Creative Life: A Conversation Series.

LuPone most recently starred on Broadway as cosmetics pioneer Helena Rubinstein in the musical War Paint, for which she received Tony, Drama Desk and Outer Critics Circle Award nominations for Best Actress in a Musical, and will be returning to London's West End stage in Marianne Elliot's new production of the Stephen Sondheim-George Furth musical Company later this year.

LuPone is a two-time Tony Award winner for her performances as Madame Rose in the most recent Broadway revival of the musical Gypsy and for her now legendary performance in the title role in Andrew Lloyd Webber and Tim Rice's Evita.

A graduate of the first class of the Drama Division of New York's Juilliard School and a founding member of John Houseman's The Acting Company, LuPone has starred in several television and movie productions and her musical recordings include Far Away Places, Patti LuPone at Les Mouches, The Lady with the Torch, and many original cast recordings including most recently War Paint, Women on the Verge of a Nervous Breakdown, Gypsy, and Sweeney Todd.

Following LuPone's appearance at UAlbany, she will bring her critically acclaimed concert, Don't Monkey with Broadway, to Proctors in Schenectady at 8 p.m. on Friday, April 27, 2018. LuPone, will explore, through indelible interpretations of classic Broadway show tunes by the likes of Richard Rodgers, Lorenz Hart, Jule Styne, Leonard Bernstein, Stephen Sondheim, Cole Porter and Irving Berlin, how her life-long love affair with Broadway began and her concern for what Manhattan's Theatre District is becoming today.

Major support for The Creative Life is provided by The University at Albany Foundation with additional support from the UAlbany Alumni Association, College of Arts and Sciences, Office of the Provost and University Auxiliary Services.