Women Writers of the Kurdish Diaspora, Ava Homa and Kaziwa Salih, to discuss their work, October 23, 2013

Appearance part of UAlbany series, "Women of the Middle East" 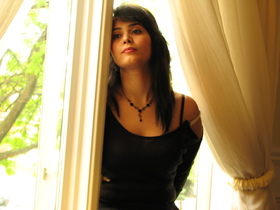 ALBANY, NY (10/09/2013)(readMedia)-- Two women writers of the Kurdish diaspora, Ava Homa, a nominee for the prestigious Frank O'Connor International Award for the art of the short story, and Kaziwa Salih, founder of the Canada Anti-Genocide Project, will discuss their work on Wednesday, October 23, 2013 at 4:15 p.m. in the Recital Hall, Performing Arts Center, on the University at Albany uptown campus. The event is free and open to the public, and is part of the "Women of the Middle East Series" cosponsored by UAlbany's Office of International Education, New York State Writers Institute, International Academic Program, Global Institute for Health and Human Rights, Women's Studies, Center for Women in Government & Civil Society, and University Auxiliary Services.

As part of the "Women of the Middle East" series, the UAlbany Office of International Education and the New York State Writers Institute will present a reading and discussion by two Kurdish authors, Ava Homa and Kaziwa Salih.

Ava Homa is a Toronto-based Kurdish fiction writer and university lecturer. She was born and educated in Iran, where her father- for the crime of possessing banned books- endured both imprisonment and torture. Homa, who writes in English, is author of the short story collection, Echoes from the Other Land (2010), featuring tales of modern Iranian women in conflict with social and cultural norms. The book was nominated for the 2011 Frank O'Connor International Award, the world's largest monetary short story prize, sponsored by the city of Cork, Ireland. The book also came in sixth in the Reader's Choice contest of the CBC (Canadian Broadcasting Corporation) for the Giller Prize, Canada's leading short story prize.

The Toronto Quarterly said that Homa "has been regaled as Canada's answer to Raymond Carver, and rightly so. Her stories are incredibly succinct and breathtaking. Homa exquisitely portrays the lives of her female Iranian protagonists, who continually prove to be unafraid of taking hold of their own lives, unveiling an inner-strength that is not only surprising, but a lot more universal than might have been first expected."

Kaziwa Salih, fiction and nonfiction writer, poet, journalist and activist from the Kurdistan Region of Iraq, is the author of ten books of fiction and nonfiction published in the Kurdish language (none available in English translation). She and her family endured many years of persecution at the hands of Saddam Hussein's regime. Her brother was murdered, and her father languished in prison during much of her youth. She herself was dismissed from a teacher's college because of her family's political affiliations.

Her short story collections include The Wisdom of Being a Gypsy (1998) and Those Unreadable Letters Before Death (2004). Nonfiction books include Kurdistan's Women on the Threshold of Globalization (2002) and The Knowledge of Feminism and Kurdish Society (2005). In the late 1990s, she served as editor-in-chief of two Kurdish language magazines, NVAR and NWEKAR. She is also the author of three children's books. She fled to Canada with two younger brothers in 2003. An outspoken human rights activist, Salih is the founder and chair of the Canada Anti-Genocide Project, and has served on the board of the United Nations Association in Canada (Toronto branch).

For additional information, contact the Writers Institute at 518-442-5620 or online at http://www.albany.edu/writers-inst.